You are here: Home / Library / Finding Faith Inside the Big Blue Box 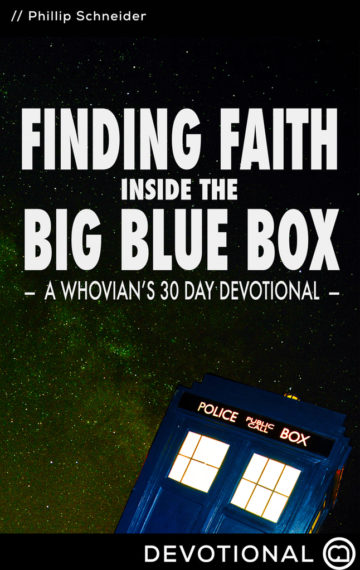 “What’s Doctor Who about?”

Non-Whovians (or should I say “Potential Whovians”) often ask me that question. Perhaps you’ve received similar questions. If so, how do you answer them?

“It’s about an alien who looks like a human, but he has two hearts and a sonic screwdriver and a space ship/time machine that looks like a police box.”

It’s a good answer, but it doesn’t do the show justice.

Christianity is largely the same.

Much like Doctor Who, following Jesus has to be experience before it can fully understood. (Of course, the same applies to bow ties and fezzes. You can’t judge them till you’ve worn them.)

I’d like to help you on that experience. Using Doctor Who as a backdrop, I’ve written a 30-day devotional that will walk you through some basic elements of your Christian faith.

Do you love Doctor Who?
Do you love Jesus and want to understand His Word better?

Then, we’ve got something for you, something far more enjoyable than a bus tour across the diamond planet Midnight and far more nourishing than fish fingers and custard.