You are here: Home / Blog / Proof of Heaven 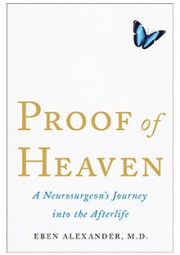 Quick Facts
Written by neurologist Eben Alexander III; overall a fairly accessible read, though some passages include confusing medical terminology while others are so fantastic and illusionary that they can be a difficult to read

Author’s Big Idea
The materialistic/naturalistic view of life as physical only with no transcendent, spiritual reality behind or beyond this one is wrong. God is real, and He loves us. However, “God” is a nebulous concept, devoid of any personal expression or truth.

My Response
There truly is a transcendent, spiritual reality that exists along with, behind, beyond, and in the midst of this physical world. God is real, and He loves us more than we can understand. He has revealed Himself to us through Jesus, who expressed the truth of His love for us by dying for our sins on the cross while proving Himself by rising from the dead, inviting us to share in His life for eternity.

Summary
Dr. Alexander was hit by a severe E. coli infection, which by an incredibly rare and nearly fatal turn, began to attack his brain, starting with his prefrontal cortex. For those without a medical degree—including myself!—that’s the part of the brain most often believed to be the source of consciousness, without any regard being given by the scientific community for the idea of a soul. Dr. Alexander’s infection was so intense and effective that he was thrown into seizure and from there into a coma. While in the coma, Dr. Alexander’s prefrontal cortex was completely shut down, rendering him dead or at least essentially dead from the perspective of consciousness.

With this as the background, Dr. Alexander tells the story of what he experienced during his coma. Now, he stresses throughout the book that because he had no prefrontal cortex he was without consciousness, if the larger medical/scientific community’s naturalistic, anti-spiritual perceptions are true. Due to this, Dr. Alexander believes that his visions are proof that the human soul exists and that heaven is real. Now, to the matter of his visions…

While in his coma, Dr. Alexander had a lengthy vision of the afterlife. He visited a disturbing, hellish realm that turned out to merely be a middle ground between our realm and the next, which was an idyllic paradise filled with all the beauty and majesty one could imagine. While in this paradise, Dr. Alexander met his deceased sister, whom he had never met in his earthly life, met “God,” whom he refers to as “Om,” and gained some insight into the greater mysteries of the universe. The process by which he did this? Hard to describe, even for him. The universe, God, the melody of heaven, radiated the answers in wave after wave through every bit (not atom, cause he wasn’t physical) of his being.

Issues?
Am I going to go hard here and say that Dr. Alexander’s vision can’t possibly be real? No. I’m pretty sure I would have a few years ago. Instead, I’m going to address the validity of the vision separately from my concerns about what the vision might indicate theologically.

Dr. Alexander contends that his visions are proof of the soul because his prefrontal cortex was entirely shutdown during his coma. However, many skeptics contend—and I wondered the same thing—that his vision occurred when his cortex slowly returning to normal as he came out of the coma. Dr. Alexander argues that his visions were too detailed, too profound to have been the result of this process. However, my question to him would be, how can you claim to offer verifiable evidence of the soul if you are the only one able to verify this evidence? You can’t claim that your visions were too incredible to have been delusions when your own ability to assess them was undermined by the fact that you were having these visions.

Now, concerning the theology. Dr. Alexander’s visions present a God who is powerful, transcendent, and loving. However, He—and I don’t think that Dr. Alexander would appreciate me using a masculine pronoun—isn’t presented as personal. God or “Om” is more like a force, an impersonal entity that connects all beings together. This is pantheism, the idea that all of life is connected by a “force,” i.e. Star Wars. What’s more, if I can cut through to a very simple point, beyond the universalistic, nonjudgmental undertones of the book, there’s a very important element of this presentation of Heaven that’s lacking: Jesus. The Son of God only gets two passing references in the book, none of which present Him as God, Savior, etc. That’s the most troubling part. With this in mind, I don’t see how any Christian can read this book and not regard it as false.

The Verdict
An interesting read, but I wouldn’t recommend Proof of Heaven to anyone without a very discerning spirit. The story moved quickly, and I wouldn’t say that I didn’t enjoy it. However, I don’t think it’s readability make up for the misleading/heretical views presented in the book. I mean, come on! I don’t really buy into any of these accounts of going to Heaven and coming back, but this one least of all because it presents a non-personal God, absent the Savior.