You are here: Home / Blog / “Like for Jesus,” Scroll for Sanity

I’ve been a Facebook user since around 2005. I don’t say that to gloat—there’s no pride in that statement. No, what I’m trying to communicate is longevity. I’ve seen Facebook evolve, and I’ve seen it change as its user base has changed. And to that end, as older adults, who are statistically speaking more religious (in a cultural sense), have joined Facebook, my feed has become increasingly more religious.

Now, I’ve used the term ‘religious’ twice for a very particular reason, even though the religion in question is Christianity: the amount of religious items I’ve seen in my Facebook feed have increased, but I’d say that the overall evidence of Christianity or Christ-likeness of my feed has remained the same.

Allow me to explain with a prime example of what many people would consider a true display of ‘Facebook faith.’ 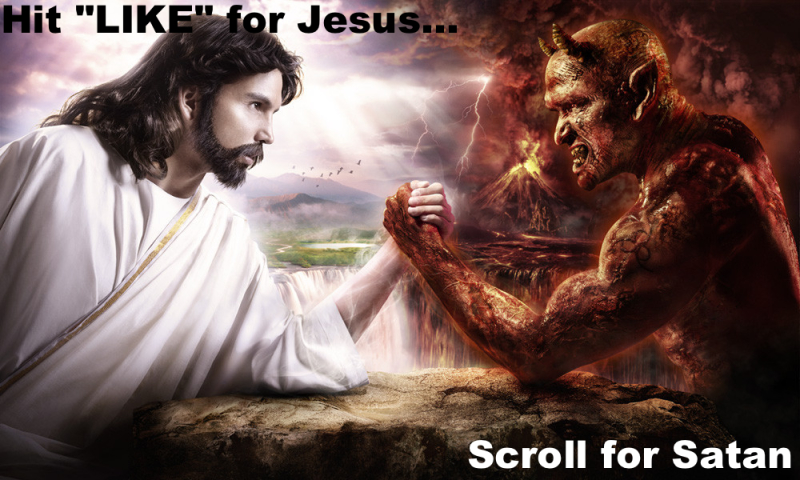 The image above1 has appeared in my Facebook feed more times that is appropriate, which is one time, in case you were curious. Usually, there’s a considerable amount of text accompanying it, generally including a threatening or shaming statement like “Only 10% of my friends will LIKE this” or “ALL TRUE CHRISTIANS should share this RIGHT NOW to show the devil who he’s dealing with!” Either way, it’s over-the-top, hyperbolic rants like this that make Christians look stupid.

That might sound harsh to you, but trust me: I’m keeping my harsher thoughts to myself.

Sharing images like this is a terrible way to share your faith online. In fact, it might be one of the worst, and here, briefly, is why sharing posts like this has got to stop.

1. These posts ask for commitment without conviction. Anyone can like or share a post or image, and if you post something like this, many people will do one or both of those. However, how many of those people are actually living the life of Christ? Sure, they might “like” the image, but do they really love Jesus? I’m really opposed to giving anyway an out, a way of feeling like a Christian without being one, and this type of online interaction does just that.

2. They appeal only to Christians. My non-Christian friends—and that’s a broad group including atheists, agnostics, non-church, ex-churched, etc.—laugh heartily at these ridiculous displays of immaturity and narrow-minded theology. (Side note: many of these friends have a better grasp of Christian theology than most/the most vocal Christians do. Kinda sad.) Clearly, this bit of cyber evangelism isn’t effective, so who are we appealing to? Christians! Of course! Because why wouldn’t Christians try to find one more way to appeal only to themselves! We’re like an overzealous bachelor who choses his clothes and cologne based upon what he likes and yet can’t figure out why women won’t give him the time of day.

3. They reveal our lack of reverence, understanding, and authenticity. As Christians, we contend that Jesus is the eternal Son of God, firstborn from among the dead, and the King of kings. And yet He’s arm wrestling the devil? Granted that this is only one of the images that gets thrown up on Facebook, but they all tend to make Jesus less than He is. Jesus doesn’t need to fight devil; no physical altercation is required. The physical side of this battle already occurred, and Jesus won the victory by ‘losing’ on the cross. When we post these images, we reveal how little we know about the nature of God, the theology of Christ’s victory of Satan, and even the simple fact that Jesus wasn’t a white guy! (More on that topic later.) Furthermore, posts like this aren’t authentic. As previously stated, they almost always attempt to bully people into liking/sharing them. That’s not authentic. Secondly, as also previously stated, these posts don’t have to come from the deepest parts of your heart. They reflect nothing of the work of Jesus within you, and as such, serve as an incredibly poor testimony to the power of Christ in your life.

4. They offend other Christians. I wanted to phrase that as “They offend ‘true’ Christians,” but that would be stooping to the level of these posts, which is more than bit hypocritical. Still, some strong language is required here.

And here it comes.

Who gave you the right to designate what constitutes a “TRUE CHRISTIAN”? And for that matter, how dare you minimize my commitment to my Savior to such a trivial display? It’s absolutely ridiculous that you, a believer in Jesus, one saved by His blood, would then present your commitment to Him as something to flippant and surface as “liking” a post on Facebook. Stop it.

That is all, thank you.