You are here: Home / Blog / Monk Habits for Everyday People 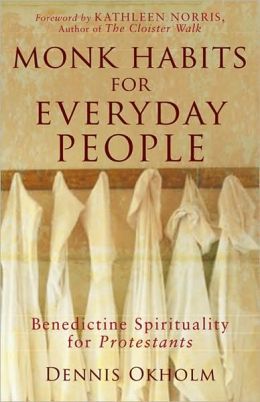 I picked up Dennis Okholm’s book, Monk Habits for Everyday People: Benedictine Spirituality for Protestants, this past summer after seeing it reviewed/featured on several blogs that I enjoy. Despite my vast theological differences with Catholics, I’ve always had a soft spot in my heart for the traditions and liturgy of a denomination centuries older than my own. To me, an outsider, the Catholic tradition was one that fostered an awe and reverence for God. (That’s not to say that some of their traditions aren’t harmful or that the good ones are anything more than “man’s traditions.”)

Maybe I misread the title and built up a misrepresentation in my mind, but I read this book looking for some suggested habits that might help me as a Protestant. That’s not what Dr. Okholm had in mind when he wrote the book, which is fine.

If I read the book correctly, Dr. Okholm’s intention was to bring some clarity to the common ground that already exists between the monastic and the evangelical. If that was his intention, then he succeeded. I am not ecumenical in the least, but I was convinced that there is a great deal of unity in spirit between what the Benedictine monks practice and what I would consider essential to following Jesus. Firstly, they value the Word of God. The Bible is consistently presented as the highest sources for spiritual formation and correction, a position that one cannot take for granted these days. Secondly, there is nothing presented to the reader by Dr. Okholm that the Benedictines, in anyway, see their lives as more holy than ours. They may find their lives to be simpler and therefore might more easily help one become closer to God, but I think that most modern evangelicals would look at their own lives and agree that anything would be much simpler than this.

What I found most interesting was the discussion of the vows that all Benedictine monks take, . I’ll round out this review with a brief summary of each, but first, I’d like to highlight a misconception and a delightful correction I experienced.

My impression of life as a monk, which I would have described as “marginally informed,” certainly assumed that all monks took a vow of poverty. What I didn’t know is that not all vows are created equal. In this case, Benedictine monks don’t forsake all possessions, as some monastic orders do, but instead hold all of their possessions in common. The house that a monk belongs to might have a car or a library that is shared amongst all of the brothers (or sisters in the case of nuns). At the same time, the author relates an anecdote presented to him by a Benedictine nun that I found particular enlightening: in her community, the nuns would mark their names in their books, affixing ad usus before their names. What does ad usus mean? “For the use of,” which meant that this book, which to an outsider would be considered the property of a specific nun, was considered by the nuns to not be possessed but to be steward by a specific nun. That’s a wonderful way to view the material blessings that God has given us.

Okholm takes this though and applies it to the modern evangelical church: what if your church or my church and a “library” of materials that could be helpful to its members? Materials like tools, dishes/utensils, a large truck and/or trailer, etc. I think this is a very cool idea. My church just cleared out our library this past summer because it had become seriously out of date and unsustainable. Besides, what’s the point of offering a church library when our town already has a much superior library? However, our town does not have a way to share tools and dishes and whatnot. Could this be a way we help our members, a way in which we share what God has given us?

Stability
Vowing to be “stable” seems a bit…I don’t know…odd, right? It really makes pretty good sense. See, unlike other orders, Benedictine monks don’t join the order “in general;” they join a specific house. The author makes a great comparison here about how our world could use a great deal of stability, in the church and in the home. We need to learn the value of stability underscored and supported by love such that we will work through difficulties and disagreements in our marriages, relationships, and church families.

Conversatio Moralis
This vow isn’t given as much focus in the book, which may be due to the difficulty and breadth with which this Latin phrase is translated. Dr. Okholm, on page 55, refers to it as a “daily turning to God,” which made me think of what the evangelicals call “devotions.” However, I think this idea of “turning” creates a much better theology. Most people’s devotional time—mine included, more often than not—is more about what we do for God: reading, writing, singing, memorizing, talking, etc. The idea of “daily turning to God” connotes an imagery of dependence, of submitting to His sanctifying work, of centering oneself with Jesus, all while acknowledging that by simply waking up in the morning one may have turned away from the Savior.

Obedience
The idea of vowing to obey seems archaic and absolutely ridiculous to most of us in the Western world, especially Americans. Vowing to be in a perpetually submitted state is anathema to most of us. However, Dr. Okholm surely knows this and presents this vow in a wonderful way. Breaking the stereotypical image of a monk or nun being ordered about by their superiors, he presents obedience as a conversation, an ongoing dialogue at the heart of all relationships, especially that of the monk to his superior. Linking the vow of stability (faithful listening) and the daily turning of oneself to God, the third link of obedience, played out through a living dialogue between two ardent Christ-followers, arises as a natural outflow of faithful, selfless submission to God.

“We have become consumers of religion rather than cultivators of a spiritual life; we have spawned an entire industry of Christian kitsch and bookstores full of spiritual junk food that leaves us sated and flabby.” page 35

“[T]he test of any religious community that claims to be a Christian community is the extent to which the individuals in it, through their life together, are being transformed into the likeness of the one whose body they eat and whose blood they drink.” page 37

“Benedict reminds us that the blessed life does not consist in the fulfillment of material desires but in the redirection of all desires to our seeking of God and loving of neighbor….We hear what we are trained to hear. And if we have been trained well to be possessive consumers, then we may not be well trained to hear the needs of others or the voice of God. In fact, we may actually lose the capacity to serve others.” pages 48-49

“[A] continual reminder of our morality and of the cosmic reign of God in all its fullness helps to shape monastic simplicity, as it must ours, so that Christians can practice the bumper-sticker imperative ‘Live simply so that others can simply live.'” page 53

“I suspect that if more Christian institutions paid as much respect to their members as Benedict insists upon in the concrete, there would be the kind of competition to obey one another that Benedict suggests….When I stop grumbling, I am in a position to listen. In fact, obedience is the aim of listening. (Interestingly, in Latin, the same word, oboedire, can mean “to obey” or “to listen to.”) I hear the needs of my brother or my sister, or I hear God’s call through my Christian sibling, and I respond in obedience.: page 59

“Stability means begin faithful where we are—really paying attention to those with whom we live and to what is happening in our common life. In fact, persevering in stability is really persevering in listening. page 91

I’d totally recommend this book for anyone, but especially for those eager in learning more about those across the aisle from them in the great family of God known as The Church.