You are here: Home / Church / Remembering His Kingdom 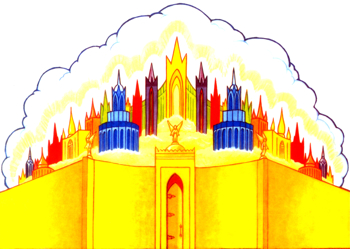 Dear Christian friends, as we begin this day that means so much for so many in our nation—a day of reflection, mourning, and also a day to honor those who serve and protect us—let us not be confused. This great land of ours is NOT His Kingdom. Neither the United States’ wars nor its politics, whether red or blue, are His.

While I believe that Jesus cares deeply about Americans, just as He cares deeply for Iraqis, Iranians, etc., I am not so sure that He is nearly as concerned with the US. How can I say that? Because the US won’t survive past The End; in fact, she may not even make that far. People are Jesus’ concern because it was for their salvation, their entrance into eternity. The US might be a great country, but it won’t carry over into eternity. The countless people that we’re bombing as collateral damage surely will, either for eternal life or eternal death.

Jesus’ Kingdom is not from this world, and He resisted any attempts to reduce—yes, reduce!—His grand and glorious Kingdom to a merely mortal one. Please remember that today admits the patriotic and sometimes nationalistic fervor. His Kingdom is not contained to our nation; His plans are far greater. His love knows no national boundaries.

Of course, Jesus’ Kingdom surely will come to this earth; it surely will become physical, visible and tangible, but not until The End. Until then, we are to live first and foremost as citizens of that invisible, eternal Kingdom, joining Jesus in His mission to bring others out of the kingdom of darkness and into the Kingdom of light. When we are confused and replace His Kingdom with an earthly kingdom, no matter how much we might love or how proud

Jesus, knowing that they intended to come and make him king by force, withdrew again to a mountain by himself. John 6:15

Jesus said, “My kingdom is not of this world. If it were, my servants would fight to prevent my arrest by the Jewish leaders. But now my kingdom is from another place.” John 18:36

But our citizenship is in heaven. And we eagerly await a Savior from there, the Lord Jesus Christ, who, by the power that enables him to bring everything under his control, will transform our lowly bodies so that they will be like his glorious body. Philippians 3:20, 21

There is neither Jew nor Gentile, neither slave nor free, nor is there male and female, for you are all one in Christ Jesus. If you belong to Christ, then you are Abraham’s seed, and heirs according to the promise. Galatians 3:28-29

For he has rescued us from the dominion of darkness and brought us into the kingdom of the Son he loves, in whom we have redemption, the forgiveness of sins. Colossians 1:13, 14