You are here: Home / Blog / The State of Theology [Infographic]

As a teacher, I’m always intrigued by surveys and studies that report on the intelligence (or sad lack thereof), so when I saw this report, the “State of Theology,” I put on my discipleship pastor hat and started to dive into the carnage.

Let’s start with stats. (If you don’t want to get too deep into this, there’s an infographic at the end that might help you.)

Sin and the Nature of Man 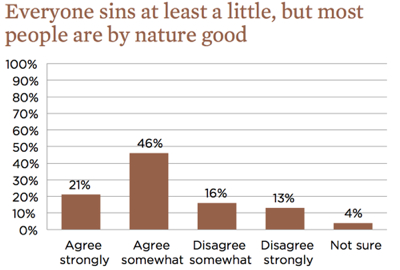 The lie that a “small amount” of sin “isn’t a big deal” is so old that it’s classic. It has no defense when faced with scripture—but then, many people also doubt the authoritative power and veracity of the scripture. (Though, if you can’t trust your faith’s scripture, can you say that you have a “faith” at all?)

Jesus replied, “Very truly I tell you, everyone who sins is a slave to sin.” John 8:34

“Therefore no one will be declared righteous in God’s sight by the works of the law; rather, through the law we become conscious of our sin. But now apart from the law the righteousness of God has been made known, to which the Law and the Prophets testify. This righteousness is given through faith in Jesus Christ to all who believe. There is no difference between Jew and Gentile, for all have sinned and fall short of the glory of God, and all are justified freely by his grace through the redemption that came by Christ Jesus.” Romans 8:20-24

The Bible is very clear that everyone has sinned and that sin deserves punishment. Furthermore, Jesus makes it clear that sin is not external to humanity, meaning that we are not “good natured” with occasional slips in behavior.

“But the things that come out of a person’s mouth come from the heart, and these defile them. For out of the heart come evil thoughts—murder, adultery, sexual immorality, theft, false testimony, slander.” Matthew 15:18-19

He echoes this same thought in the all Mark and Luke as well. Clearly, Jesus sees sin as a big deal, a problem worth dying for.

“As for you, you were dead in your transgressions and sins, in which you used to live when you followed the ways of this world and of the ruler of the kingdom of the air, the spirit who is now at work in those who are disobedient. All of us also lived among them at one time, gratifying the cravings of our flesh and following its desires and thoughts. Like the rest, we were by nature deserving of wrath. But because of his great love for us, God, who is rich in mercy, made us alive with Christ even when we were dead in transgressions—it is by grace you have been saved. And God raised us up with Christ and seated us with him in the heavenly realms in Christ Jesus, in order that in the coming ages he might show the incomparable riches of his grace, expressed in his kindness to us in Christ Jesus.” Ephesians 2:1-10

We were dead in our sins, deserving of wrath; Jesus came to bring us life. Sin isn’t just bad behavior that we have to stop; it’s a disease that needs cured, a curse that needs broken. It’s a problem that we can’t (and wouldn’t) solve on our own.

Salvation and the Efforts of Man 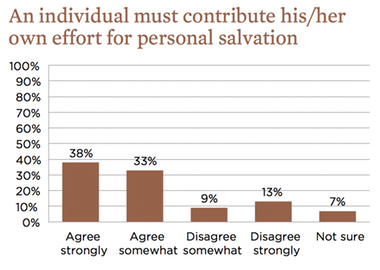 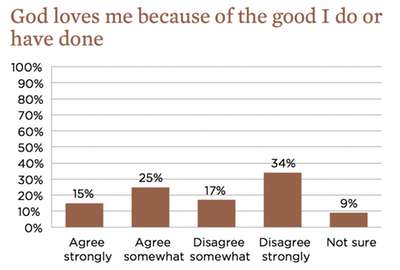 Let me start this off by quoting Ephesians 2 again:

“As for you, you were dead in your transgressions and sins, in which you used to live….But because of his great love for us, God, who is rich in mercy, made us alive with Christ even when we were dead in transgressions—it is by grace you have been saved….For it is by grace you have been saved, through faith—and this is not from yourselves, it is the gift of God—not by works, so that no one can boast. For we are God’s handiwork, created in Christ Jesus to do good works, which God prepared in advance for us to do.” Ephesians 2:1, 4-5, 8-10

We have been saved by the grace of God through Jesus Christ. Jesus fulfilled the law perfectly, died the death of a sinner on our behalf, and was resurrected physically to provide for our resurrection—both spiritual and physical. He did for us what we couldn’t do, what we wouldn’t do. We wouldn’t die to pay for our sin; we wouldn’t die to give up our sin. Sin must be wrenched away from us like an over-indulged toddler. There’s no initiative on our part to be rid of it.

Now, the idea that we need to do something to initiate, complete, or earn our salvation or that we can earn God’s love by doing “good works” is a sad statement of weak the Church’s presentation of the gospel has become. Too many churches are promoting moralism without even realizing it. With sermons that basically present three tips for improving your life each week, it’s no wonder that people believe that they have to contribute something to their salvation. This isn’t a new phenomenon, though. The Pharisees of Jesus’ day were convinced that they’re efforts at holiness would secure them God’s favor, and that’s where Jesus rubbed them the wrong way.

He also told this parable to some who trusted in themselves that they were righteous, and treated others with contempt: “Two men went up into the temple to pray, one a Pharisee and the other a tax collector. The Pharisee, standing by himself, prayed[a] thus: ‘God, I thank you that I am not like other men, extortioners, unjust, adulterers, or even like this tax collector. I fast twice a week; I give tithes of all that I get.’ But the tax collector, standing far off, would not even lift up his eyes to heaven, but beat his breast, saying, ‘God, be merciful to me, a sinner!’ I tell you, this man went down to his house justified, rather than the other. For everyone who exalts himself will be humbled, but the one who humbles himself will be exalted.” Luke 18:9-14

Here Jesus is making it abundantly clear that moralist, who feels that their behavior makes them right before God, will not be accepted by God. The one who confesses his sin and throws himself upon the mercy of God will be accepted, not on the basis of his efforts but because of the mercy of God purchased through Christ’s death. Our best behavior isn’t good enough. Isaiah 64:6 says that we are all “unclean” and that our best behavior is like “filthy rags.” Not to be crass, but go and look up what that means in context. That’s how our good stacks up compared to God’s

**If you want to read more about moralism, download my book, The Killer-Isms, from Noisetrade. It’s free!**

The Resurrection of Jesus and Our Hope of Salvation 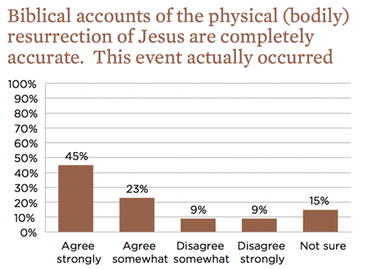 The apostle Paul has a lot to say on this topic, so I’ll let him frame our discussion.

Now, brothers and sisters, I want to remind you of the gospel I preached to you, which you received and on which you have taken your stand. By this gospel you are saved, if you hold firmly to the word I preached to you. Otherwise, you have believed in vain.

But Christ has indeed been raised from the dead, the firstfruits of those who have fallen asleep. For since death came through a man, the resurrection of the dead comes also through a man. For as in Adam all die, so in Christ all will be made alive. But each in turn: Christ, the firstfruits; then, when he comes, those who belong to him. 1 Corinthians 15:1-8; 12-23

Allow me to sum this up for you: if you’re a believer, you must hold to the gospel, or you’re truly a believer in nothing. Secondly, if Jesus wasn’t resurrected and isn’t physically alive at this present moment, then our faith is useless, and “we are of all people most to be pitied.” Did you catch that? He’s saying that if Jesus didn’t physically walk out of that tomb on the first Easter Sunday, then we have no reason to believe in Jesus, no hope for anything eternal, and deserve to be pitied in the same way that you might pity someone who’s entirely deluded.

Pretty disheartening statistics, right? I’ll write more later about what we can do to fix this issue, but for right let’s allow the realization of how far we’ve fallen sink in while passing this news on the others. Here’s an infographic from Ligioner that might be helpful in that sharing process.

The State of Theology: Inforgraphic

[Infographic, stats, and everything of value comes from Ligioner’s StateofTheology.com]