You are here: Home / Blog / We Are Not Persecuted

I am not a culture warrior, though I feel like there’s an expectation of some people in my religious circle that I should be one.

I’m sorry. It’s just not in me. That’s not entirely true. It’s in me. It’s not in Jesus, and I want Jesus to within in me.

Putting that aside, I’d like to take a moment to speak to the culture warriors out there who are consistently making a fuss about the treatment of Christians in America. But first, some facts.

Earlier this year, Open Doors, an organization dedicated serving persecuted Christians, reported that the amount of Christians martyr for their faith doubled in 2013, 2,123 deaths compared to 1,202 deaths in 2012.1 Furthermore, the same article notes that Open Doors is estimating that 50,000 to 70,000 Christians are being held in prisoner camps in North Korea. 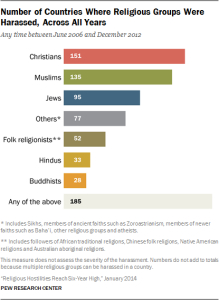 The Pew Forum reported back in January that “religious hostilities” reached a six-year high in 2013.2 In the accompanying chart (Figure 1), you can see that Christians were indeed the most persecuted, but three things should be noted. 1) As Christianity is the world’s largest religion, it would made some statistical sense that it would experience the most persecution, since it has the most members to be persecuted. 2) Muslims are right behind Christians in the number of countries in which they are persecuted. “Why is that important?” Well, first of all, it reinforces the point that hatred and abuse of “others” is increasing across the board. Furthermore, even though we know that Islam isn’t true, the pain and suffering of those persecuted is real and deserves our pity and prayers. 3) The USA isn’t one of the countries counted as persecuting Christians. 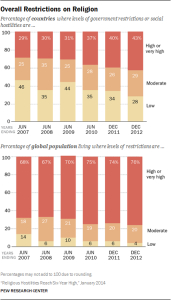 The other chart (Figure 2) clearly presents the fact that religious persecution is increasing across the board for all faiths, and that the majority of people in the world are living under some form of religious pressure or persecution. The world is getting darker. Hatred and discrimination abound as power is increasingly abused by those who have it at the expense of those who don’t. Christians don’t have a monopoly on suffering. Not to get too far ahead of myself, but we’d be a lot better off if we realized that other groups suffer pain and persecution as well and stood up them and their human rights, not necessarily the rightness of their religious beliefs.

A lot has been said on social media about ISIS and the atrocities being committed against Christians in Iraq. However, I couldn’t find any articles verifying the accounts I’d heard about. In fact. nothing really sounds verifiable, right now. Chalk it up to the “fog of war” and go ahead and mix in some skepticism as well because it’s only human nature for us to exaggerate and propagandize during times of crisis. That being said, persecution of some kind is almost certainly going on, but Christians aren’t the only group being targeted. Islam is much less monolithic than the average Westerner realizes. It’s a very fractured faith, and the various subsets of it don’t get along very well. In fact, it’s often stated that when you look at the victims of Islamic terrorism and examine their religious affiliations, the victims are predominantly Muslims also, though of a different sect than their killers4

My point in all of this is that Christians in the US have have no idea what it means to be persecuted. Sure, some news networks may not present us in a good light, and some television shows may poke fun at us—can we really blame them? We’re whining about being persecuted about being discriminated against and our brothers and sisters are being imprisoned, tortured, and killed! We have nothing to whine about. Any resistance to Christians, Christianity, or the Gospel in the US is most likely—and I mean nearly 100%—due to our steadfast failure to live out the love of Jesus. We consistently sound crazy, detached, and completely out-of-touch as we spout Fox News talking points, blame “liberals” for everything, and post pro-‘Merica statements on Facebook, asking our friends to “like” them so that we can take back our country for God. This isn’t helping.