You are here: Home / Blog / Library Fines & the Day of Grace 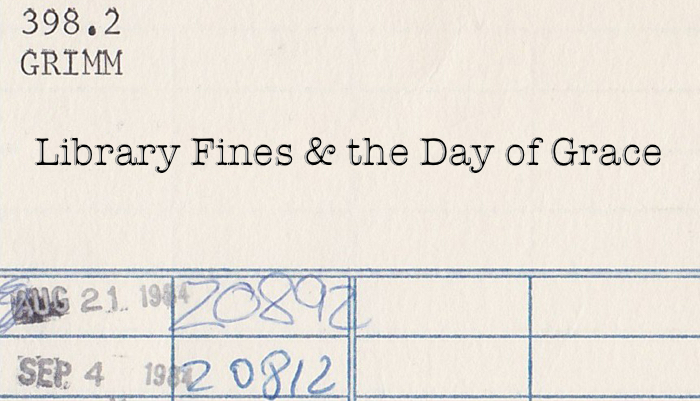 I used to work at the public library. My coworkers and our boss was awesome, but the pay wasn’t great—$5 minimum wage, because it wasn’t a career—though there was a perk of working there: fine exempt status.

Fine exempt status meant that I could return a book on time or two weeks, and it didn’t matter. Now, that said, I wasn’t one to really abuse this privilege, but I did take advantage of it. Working in a library, I would be constantly bringing home more books than I could read in a year. In fact, I still do this, only now I order them using the library’s online catalog.

So, being fine exempt would really be helpful. I currently owe $1.60 in fines, which is fine. I’ll nickel and dime it away over the next few months. (Feel free to send me a nickel or two through PayPal, if you’d like. Joking, of course, but at the same time, why not?) Thankfully, though, I can still check out books and DVDs and such as long as the total fines are under $2, and thankfully, the library does offer some help to people like me so that we don’t immediately hit that limit.

It’s called the “day of grace.”

This “day of grace” means that you won’t be charged a fine until the second day your item is overdue. It’s a nice, neighborly thing to do, as people make mistakes and forget their due dates.

And thinking about this the other day made me think of Jesus.

His sacrifice on the cross doesn’t give us a “fine exempt status,” meaning that we get to do whatever we want with no fear of punishment, but His gift to us is more than simply a single day of grace. If anything, the past two thousand years until He returns is the “Day of Grace,” meaning that if only we’d come to Him, confess our fines and the irresponsibility that brought us to this point, He would take them upon Himself and grant to us a blank slate.

But let’s be clear: Jesus did not have fine exempt status. He paid that fine out of His own flesh.