You are here: Home / Blog / In Defense of Civilian Independence 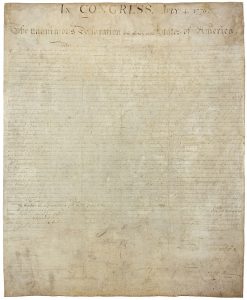 Today is the Fourth of July, which in the United States should properly be known as “Independence Day.” Whether today should be considered the day the US declared its independence doesn’t matter. We did declare it at some point or another, and the fourth day of July is when we have decided to celebrate it. End of that discussion and on to the next.

Because of this holiday, social media and social conversations have been flooded with a variety of patriotic thoughts and assertions. I’d like to highlight two that I don’t agree with and explain why: the celebration of Independence Day as a military holiday and the assertion that all fallen soldiers have died for our freedom.

Now, you probably won’t agree with me, and that’s ok. Just so long as you agree to discuss our areas of disagreement rather than just resorting to complaining or criticizing.

1. Independence Day has nothing to do with the military, so stop co-opting a civilian holiday.

On July 2, the Continental Congress agreed to a resolution declaring themselves an independent and sovereign nation, separate from Great Britain. On July 4, the Declaration of Independence was ratified. That’s why we chose to celebrate on this day. But please take note: there was no military action involved in this process. It was an entirely civilian affair.

By choosing July 4, we chose to celebrate the courageous act of civil leaders, not military officials. Independence Day is not a military holiday. It’s holiday for all citizens and for all those, globally, who aspire to freedom. Please stop making this day about the armed forces. Though their sacrifices are truly remarkable, and though their efforts have been necessary, they exist to serve the nation. The nation doesn’t exist to serve them. We have days to honor our soldiers: on Memorial Day, we remember those who died in combat, and one Veteran’s Day, we thank those who have served and are serving, but who didn’t pay the ultimate price. Let’s leave Independence Day to be the day for the whole nation to celebrate the act of declaring our nation to be independent and free.

Our soldiers fought and died in the Revolutionary War in order to gain our independence from Great Britain, and they renewed that independence in the War of 1812. The US-Mexican War was not about freedom. It was about taking territory—and possibly about expanding slavery, and it, many scholars believes, set the nation on a course toward civil war.

In the Civil War, Union soldiers died to preserve the Union. During that war, President Lincoln finally realized that the Union couldn’t be preserved if slavery was allowed to continue, so halfway through the war, he made it clear that a Union victory would mean eventual freedom for every person in the US, regardless of the color of their skin.* Thus, that was the last time a soldier of the United States died to advance the cause of our civil liberties and freedoms.

The Spanish-American War was not about defending the freedom of US citizens. For many man who volunteered, it may have been about winning freedom for the people of Cuba, but for the US government, this was a war fought to prove ourselves on the world stage, to gain an easy victory over an old and dying empire (Spain), and a chance to improve economic opportunities for American businesses.

World War I was an European War. We entered it, essentially, to get back at Germany for its unrestricted submarine warfare and its attempt to get Mexico to attack us as a distraction. It would also not be too much of a stretch to argue that we entered this war to protect our economic investments in Great Britain, since we’d been loaning them money all throughout the war and didn’t want to see them conquered and our money lost. Sure, Woodrow Wilson talked a big game about saving the world for democracy and securing home rule for the minority ethnicities of Europe, but he also was pretty darned racist against African-Americans, so it’s hard to take him seriously on this one.

World War II is where things get tricky. This was a just war, and I’m very proud of the role that the US played in winning this war.** However, we did not fight this war for our freedom. We fought it because we were provoked by the Japanese at Pearl Harbor, but I would have a hard time accepting the idea that we were truly in danger of invasion. Of course, had we not entered the war when we did, we may have eventually arrived at a moment when we would have needed to fight for those freedoms, but it wasn’t why we entered the war in the first place.

Both Korea and Vietnam were fought to limit the spread of communism, and the various military actions in Latin American in the eighties were all about extending American influence. The Persian Gulf War was about liberating Kuwait from Iraq, and the sequel, the Iraq War, was about pursuing and punishing Saddam Hussein. The overall War on Terror, in Afghanistan in particular, wasn’t about protecting our freedom. It was about destroying Al-Qaeda and punishing the nation that had harbored them as they planned and executed 9/11.

We don’t fight wars to defend our freedom anymore. Now, I’m not saying all the wars we fought were bad, but I think that if you look at the reasons I’ve listed for a lot of the wars of last 70 years, you’ll probably begin to wonder if those wars all needed to be fought.

Despite my claim that no solider has died for our freedom since the Civil War, let me be clear that I am not against our military. If you asked me: “Do our soldiers stand today in defense of our freedom?” I’d reply, “Yes, and no.”

We don’t have to fight for our freedom because no one is dumb enough to challenge our military in an attempt to take it away. The fact that our military is so great is protection enough for our freedoms. However, if you’re old enough to remember our society pre-9/11, you’ll likely remember a much freer and much less frightened society. 9/11 changed that. Because Al-Qaeda couldn’t take us on in a head-to-head conventional war, they committed a massive act of terrorism. And even though we got Bin Laden, and even though we got our revenge, so to speak, the terrorists won. They’re objective wasn’t to kill millions. It was to cause fear, so that we would take away our own freedom in exchange for more security. In that instance, our civilian leaders failed to renew the call of freedom and independence in the face of actual and potential violence.

Which brings me back to my original point: we must celebrate the idea of independence. Those men who signed on the Declaration didn’t know that they would win the war. That’s what we are celebrating today—thought it’s now past midnight—we are celebrating the courage to call out tyranny and stand against it, and to put your own safety and security on the line to do it.

Our military has done well for our nation, but it wasn’t our military that declared us to be free. It was the civilians who made the call for freedom, and yes, it was the soldiers who answered that call. Both are important, but today is the day for commemorating civilian courage, not military action.

*The war had always been about slavery, but it had been about the Southern states’ rights to retain it. For most Northerners, the war was about keeping the Union intact. It was over the course of the war that Lincoln and many Unionists began to see that slavery had to be destroyed in order to save the Union.

**I wouldn’t say I’m “proud” of dropping the nuclear bombs on Japan, but rationally, I know it was our only option.