You are here: Home / Blog / Christians and the Outrage Candidate 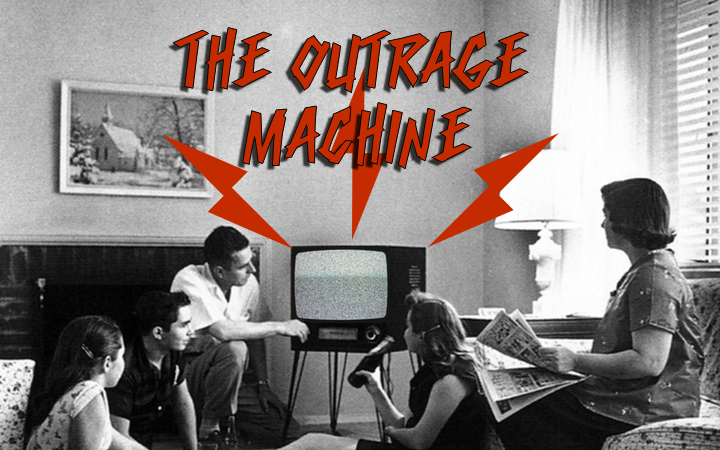 But for many Christians who can generally only see red, these are troubling times.

These are the Christians for whom the Republicans have been there their only choice for far too long. These are Christians who are very concerned about abortion, the abonormalization of sexuality and gender, and what is often nebulously called “family values.”

I’m not going to argue against these concerns. (I will argue, in another post, that Christians should have broader concerns, and that these concerns need to be redefined as well.) They are legitimate concerns birthed from true spiritual convictions, and that’s great. Politics should be informed by faith/worldview.

Sadly, I’m seeing far too much of the reverse.

For years, the Republican Party has positioned themselves as the Christian choice. The GOP came to stand for “God’s Only Party.” This wasn’t a bad thing, initially. It was nice to see a national political organization take our faith seriously, but then, it became apparent that it was branding and shallow, conviction-free marketing. How can I say that? Well, I could point out a few things to make my point, but I think I’ll just focus on this: outrage.

Over the past eight years, the Republican Party has built an outrage machine. The outrage machine takes everything done by the Democratic Party—or a Republican foolish enough to compromise with the Democrats in order to do the actual work of governing this nation—and generate outrage surrounding it. The Democratic President holds a press conference: how many US flags were there?; did he mention protecting Israel?; did he say “radical Islamic terrorism?”

Everything gets the outrage treatment, and after eight years of outrage, they have now nominated the most outrageous candidate: Donald Trump. I don’t think most Republicans would have picked him initially, but as his our personal Trump-brand outrage began to click with the partakers of the Republican Party’s Fox News-brand outrage, he became a strong second to everyone else’s first pick. Then, after the war of political attrition was waged long and hard, most of those first-choice candidates bailed out, leaving only the second-choice, the world’s angriest grandpa.

If the Republican Party was truly the “Christian” party, they would have never built the outrage machine. Romans 12-14 make it very clear that Christians are to live at peace with others, respect the authorities over us, and obey the law of love over all others. If the apostle Paul can urge Christians to respect the Roman authorities, who were actually persecuting them and not the pretend, outragified persecution that we complain about on Facebook, then we have no excuse. My daughter refers to our Commander-in-Chief as “President Obama.” She shows respect for both the person and the position. So many Christians don’t do either because to respect the position is to respect the person who holds it. Understand something: respect doesn’t equal agreement. But if Jesus didn’t call Pontius Pilate a pagan or King Herod a baby-killer, then I don’t see how any Christian can get away with calling our President half of the things they call him.

I don’t agree with the President much at all. In fact, there are many times when I vehemently disagree with him, but I refuse to disobey God by disrespecting the individual who has been given authority by Him.

So, now, the outrage machine has been running full strength, sewing hate and distrust among one half the nation toward the other, and now, Donald Trump is what the Republicans are reaping.

And what can I say about Mr. Trump that hasn’t already been said by late night hosts and media pundits? (Even Max Lucado is bemused by this outrageous turn.) I think I’ll say this: Mr. Trump is the least Christ-like “Christian” candidate I have ever seen. In fact, in this election cycle, the most Christ-like things I’ve heard have come from Bernie Sanders. Trump lies, denigrates, complains, vilifies, and spreads his message of fear and naysaying in ever increasing doses, and so many Christians are taking it down without question.

But why? Why accept, let alone support, a candidate who clearly doesn’t believe what he says about God? He claims to be a Christian but refuses to act like Christ. In fact, he actually delights in his un-Christian attitudes, actions, and words. So why vote for him? For starters, the Republicans have been building Hillary Clinton up as the devil incarnate for years, so even a lesser demon like Trump would be better. Or at least, that’s how they’re choosing to see it.

But let’s be objective, for just a second! Fear not, brothers and sisters, I won’t keep you in the real world for long.

I think this is a classic “lesser of two evils” situation, but the problem with that mentality is that 1) we’re stilling choosing evil and 2) we’ll never go back once we go down the path of evil. If we truly want to choose the best candidate, we must force the major parties to present better candidates. We must teach our brothers and sisters who are hooked on the outrage to think better of their chosen leaders by sending a message that we refuse to let our faith become synonymous with racism, sexism, and a message of hate and anger.

“Too late,” you might say, and you’re probably right, but at least we can to stem the tide and eventually undo the damage.

So what’s my solution? How do we send a message that we’re tired of outrage and want answers, real policy solutions?

Vote for a third party.

Hear me out before you go back to Facebook and dismiss me entirely!

For Republicans, the logical third party choice is the Libertarian nominee, Gary Johnson. Gary is a flawed candidate. Very flawed, and he is unlikely to win the election. Even if he did, he wouldn’t accomplish much as he differs greatly in his opinions from those already installed in position of power. But, as I said before, we’ll never get a better candidate if we continue to accept the garbage we’re given.

I haven’t voted for a Republican presidential candidate in quite some time—it was how I was raised—though I still have great affinity for the Party of Lincoln. I would love to be able to vote for one of the two major parties. (Read that as: “I’d love for my vote to count.”) But I cannot, as a Christian, vote for someone who is seeking to redefine Christianity. Say what you want about Hillary Clinton—you will anyway—but at least she leaves our faith alone. Sure, she pushes issues that don’t align with Christianity, but she doesn’t seek to redefine the image of what a Christian should look like. Donald Trump, with his unrepentant attitude and continual double-downing on offensive statements, is doing just that.

Jesus expressed outrage on a number of occasions, but what is telling is that He saved His outrage for those who should have known better: the religious elite. It’s sad that Christians are wantonly spending their outrage on those who don’t know better: those on the outside of the church.

The GOP has chosen to put up the Outrage Candidate, the dubious results of nearly a decade of using their outrage machine. Will Christians support this clearly unbiblical approach to politics?