You are here: Home / Blog / No Clerical Error 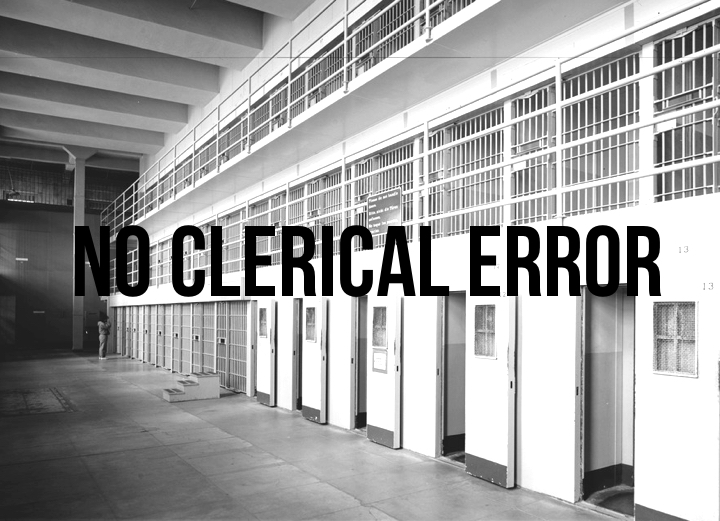 I remember reading a story a long time ago about a prisoner who was released from police custody due to a clerical error. They read the wrong ID number, looked at the wrong picture, opened the wrong door—it doesn’t matter because either way they let the wrong person go free.

Such a story sounds so ridiculous that I wanted to make sure that it wasn’t an urban legend, but after a quick internet search, I found a few recent stories along the same line.

Apparently, this is a fairly common phenomena.

I was listening to the song “My One Comfort” by Dustin Kensrue when all of this came to mind, and that’s when this line struck me:

By the Father’s good decree
Jesus, you’ve delivered me
By your Spirit set me free
To follow you

(You can listen to it here. It’s a great song.)

It was no clerical error that set me free. It was by the decree of the Father. There is no one waiting for me to turn myself in; no one searching for me. I’ve been set free to be free, to live a new life for Jesus. God consciously, willing, joyously set me free…despite the incredibly high price that had to be paid.

That’s all I have to say about this; it’s such a wonderful thought that I’ll leave you to it. Maybe I’ll let some Scripture speak for me.

He went to Nazareth, where he had been brought up, and on the Sabbath day he went into the synagogue, as was his custom. He stood up to read, and the scroll of the prophet Isaiah was handed to him. Unrolling it, he found the place where it is written:

“The Spirit of the Lord is on me,
because he has anointed me
to proclaim good news to the poor.
He has sent me to proclaim freedom for the prisoners
and recovery of sight for the blind,
to set the oppressed free,
to proclaim the year of the Lord’s favor.”

Then he rolled up the scroll, gave it back to the attendant and sat down. The eyes of everyone in the synagogue were fastened on him. He began by saying to them, “Today this scripture is fulfilled in your hearing.”

Some sat in darkness, in utter darkness,
prisoners suffering in iron chains,
because they rebelled against God’s commands
and despised the plans of the Most High.
So he subjected them to bitter labor;
they stumbled, and there was no one to help.
Then they cried to the Lord in their trouble,
and he saved them from their distress.
He brought them out of darkness, the utter darkness,
and broke away their chains.
Let them give thanks to the Lord for his unfailing love
and his wonderful deeds for mankind,
for he breaks down gates of bronze
and cuts through bars of iron.